There have been a lot of explanations offered as to why and how All-Star Superman's benevolent super-genius, Leo Quintum, could also be its evil super-genius, Lex Luthor. I thought I'd collect and categorize the best clues right here - and, in doing so, I think I've inadvertantly compiled a pretty good argument as to why this series is so incredibly awesome. 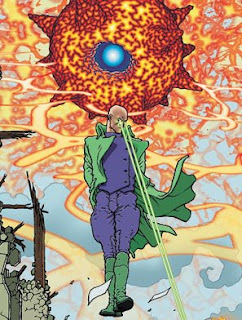 The Morrisonian: Grant Morrison absolutely loves two things: drug-induced epiphanies and time-travel. Luthor experiences the former when he ingests the vial that gives him Superman's powers, and it's no small stretch to imagine that he could have subsequently traveled to the past in order to do something about his new perspective, thus fulfilling the latter.

The Superficial: They wear very similar coats. They like to clasp their hands behind their back. Leo looks young, but uses a cane, which would seem to imply that he's possibly older than appearances suggest - or it functions to change his posture and disguise his body language. (The age issue is also tricky, of course, since Lex's reason for trying to kill Superman in issue 1 had a lot to do with Lex getting old. So maybe Leo looks younger because a redeemed Lex has actually reversed the aging process?) Quintum has hair and glasses, but this also makes sense as a disguise: hair and glasses are what differentiates Clark from Superman, after all.

The Merely Suggestive: In Quintum's very first appearance, he throws out a comment that is never revisited but seems mighty suspicious: "I'm trying to escape from a doomed world too, Superman... It's called the past." And when Superman gives Quintum his DNA later in the series so that he can build new Supermen when Clark dies, Quintum's reluctance is similarly provocative, as he tells Superman that "I could be the devil himself for all you know." Since Quintum doesn't eventually betray Superman, this exchange serves no purpose unless Quintum in fact is the nearest thing that the DC Universe has to the devil, albeit a reformed devil. 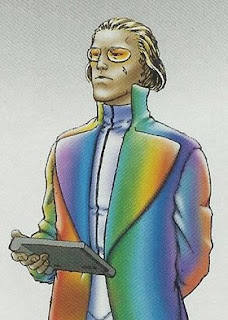 The Suggestive as Supplemented by the Pseudo-Scientific: Superman's response to Quintum's comment about being the devil is, just as interestingly, "Oh, I think I'm a better judge of character than that, Professor. This is how much I trust you, Leo." We could take Superman at his word, that he can separate the good apples from the bad, but recall that Superman had just used his x-ray vision to write out his own DNA sequence. The dude can read DNA strands. Again, if this exchange is simply an admission of trust in a character that we had never met before this series and have been given no reason to distrust, then it's not a particularly moving or necessary scene; but if Superman has read Leo's DNA and knows that he's Lex, it's a staggering and moving display of confidence in his former nemesis.

The Textual: Leo's line about maybe being the devil is additionally ironic because Lex, especially in this series, has often been compared to the Miltonic Satan. A self-deluded narcissist who squanders his considerable powers in petty efforts to prove himself superior to Superman, Lex - to quote Superman in A-SS #12 - "could have saved the world years ago if it really mattered to [him]". But like Milton's Satan, Lex is more interested in power and proving himself deserving of power than he is with saving the world - he'll even risk the world's safety by killing Superman in pursuit of his self-actualization. Additionally, Leo's last name has a more direct connection to Milton's Satan, as Macon Cheek has suggested that Milton actually produced a literary precursor to his Paradise Lost Satan in an earlier poem. And the poem was titled "In Quintum Novembris."

The Numbers: For those who look for clues in seemingly conspiratorial patterns of numbers, there's a lot here to play with. "Quintum", in addition to having a certain phonic relation to "quantum" - and quantum mechanics are related to time travel, to tie this back to an older point - quite obviously has the latin number five imbedded in it. But where else do we see that number? Well, Lex's focus issue is #5, his prison jumpsuit is 221 (2+2+1=5), and at his trial he's situated as the fifth truly evil personality in a line that includes Adolf Hitler and Genghis Khan.

The Thematic: Thoroughout the series, Superman is resolute in his belief that humanity is capable of doing everything that he has done, that they will be no worse off without him if only they believe in themselves. Though he tells Lois that he's the only person strong enough to lift the key that opens the door to the Fortress of Solitude, he also hopes that "One day some future man or woman will open that door, with that key." His fortress, he explains, isn't a "museum", but rather a "time capsule" - not a record of some past age of superheroes but an example for the one that is yet to come. And this lesson is all the more meaingful if Lex Luthor himself, as Leo, is seemingly on the verge of creating the new man or woman who will be capable of lifting that key. Further to that point, Cole Moore Odell suggests that when Superman admonishes Lex in the final issue for wasting his genius we should read it as a challenge rather than a rebuke - a request that Lex, having seen the error of his ways with Superman's super-senses, will refocus his efforts and actually save a world without Superman. And he'll even do it in the way that Superman suggested: "years ago." His reformation, then, is Superman's greatest triumph - a moral victory that manages to touch even the most cynical and skeptical of us. (Which is to say: it reforms the Lex Luthor in all of us.)

The Silly: So we've touched on nearly everything right? Except for why he named himself "Leo". It's similar to "Lex", sure, and it could simply be that Morrison wanted to drive home the fact that they're mirror-reflections by opposing Lex's "X" to Leo's "O". (Get it?) But there's somethign else - Leo Quintum isn't the only Leo in this series. In a blink-and-you-missed-it moment in issue 5, Lex briefly introduces his Superman-costumed primate to Clark Kent. Its name? Leopold. It's a connection that's at once hilarious and convincingly self-effacing: if Leo is Lex, then Lex has genuinely swallowed his pride in naming himself after a monkey. No wonder Superman felt he could trust him.
Posted by neilshyminsky at 8:52 am

And as I said elsewhere, Superman would *know* that Lex/Leo was destined to do the right thing with his DNA, because in issue #6, he met the results--his 'descendants' in the Superman Squad--even though he also knows he and Lois can never have children naturally.

But I'm increasingly taken with Douglas Wolk's point about the nature of quantum uncertainty, as explored explicitly in issue #3; since Morrison never tells us for sure, Leo exists in a quantum state, both the future Lex and his own man. I also love Wolk's catch from #12, when Kal-El says he has to visit "Doctor Lex-Or."

Also, I love the observation made by Marc Singer in Jog's thread on A-SS #12 at Savage Critics that Leo's rainbow coat explicitly combines the primary colors of Superman's costume with the secondary colors associated with Luthor. Quintum is Luthor's scientific genius shaped by Superman's altruism, a perfect combination of the two men.

Cole: I'm not sure that quantum uncertainty is the sort of philosophy that Morrison would be apt to play with on a macro level. I'm remembering the way that The Invisibles holds together, for instance, wherein the Outer Church has always already lost. That kind of understanding of space and time - three-dimensional and non-linear, sure, but still rule-bound to holographics, as it were - seems far more consistent with what you describe in your first paragraph than your second.

Nice thought on Quintum's jacket. It hadn't occurred to me before that Luthor is almost always wearing secondary colors - orange in prison, green and purple in his battle attire - in direct contrast to Superman's primary set.

I don't know what to make of "Lex-Or", though. My first thought was that it sounded incredibly like "Luxor", which is where the Egyptian Valley of the Kings is located. (After a quick Wikipedia check, I also see that it's referred to as "the world's greatest open-air museum". Could it just be subtle reference to Krypton's distance - spatially and temporally - from Earth and in contrast to Superman's own museum-as-time-capsule, located spatially in his Fortress and temporally at the "dawn of the age of superheroes"?)

The scene with the pharoah in A-SS #3 is clearly evoking the 'Schrodinger's Cat' phenomena. But that means it's subject to the same caveats. Namely, that Schrodinger intended the experiment to be a demonstration of how quantum mechanics fails to describe how things behave at the macro-atomic level: the cat in the box is not in a state of quantum uncertainty because it is either alive or dead. While one could say, philosophically, that it could be either of the two, it is in fact only ever one and not the other.

Besides, the other strongmen had established earlier in that issue that Superman would be able to answer the "unanswerable question", so there was nothing uncertain about it at all - we, and Superman, knew that Lois would survive.

Leo is also the fifth sign of the zodiac.

I think Lexor is also a reference to the old comics in which Luthor had a planet of his own called Lexor.

Pre-Crisis, "Lexor" was a planet where Superman was regarded as a criminal, and Lex Luthor as a hero.

I think that probably qualifies it as another cue, doesn't it?

(Also of note: Lexor exploded back in the early 80s, thanks to Lex's own backfired machinations, creating an overt parallel with Krypton and an ominous association for Superman's hallucination of Krypton's destruction.)

anon and marc: Thanks for the info on Lexor. Having never read Superman prior to A-SS, I never would've known.

(Actually in reply to a much older blog of yours ... sorry for the digression ...)

Superman can read DNA codes, but in #2 he admits that it takes him a long time to read and memorize it.... But there's an even faster way for him to find out it's Luthor.

In #6 it's pretty much established that Superman can hear distinctive heartbeats (the disguised present-day Superman heard Superboy's heartbeat; Superboy knew something was wrong when he couldn't hear Jonathan Kent's heartbeat). He could recognize Luthor's heartbeat as well.

You may also notice that Samson, the time-traveling hero, is also Superman. Same colors, same build, more hair and oh, he also happens to give Superman the clue he needs to solve the riddle of the Ultra-sphinx.

It makes sense that Atlas is Luthor, time-traveling with Super-Samson, in order to keep the past in tune. Luthor is just wearing even more of a hair disguise and has powers again.

ASS is probably the best thing Grant has ever done.

Lex also talks to himself in All Star

There's another clue. When a truck crashes into the superpowered Luthor in chapter 12 he says "hmm. Now there's an amazing idea. I should be writing these-" and then he gets attacked by Superman. We saw the Luxus Samaritan car commersial back in chapter 3, saying "what happens when the unstoppable force meets the immovable object?" the ad strongly resembles Luthor crashing the truck. this suggests that he went back in time to pitch the ad.

neilshyminsky
Neil is a Professor in the English for Academic Purposes Program at Cambrian College. He writes about superheroes. He can be emailed (thewatchmaker/AT/gmail/DOT/com), Facebooked, and found on The Twitter (@neilshyminsky).